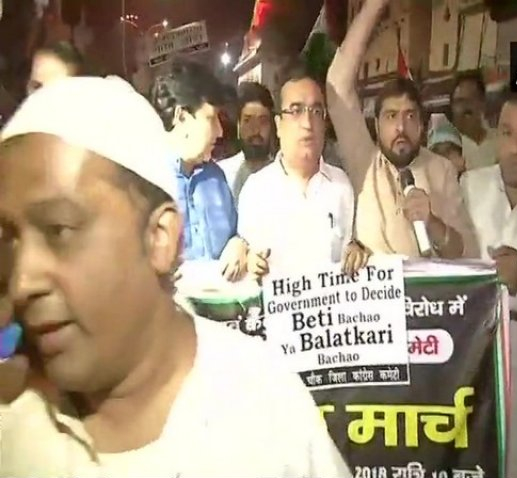 New Delhi [India],: The Delhi Congress took out candlelight marches across the city to protest against the increased cases of sexual assault against women in the country.

On the intervening night of April 12-13, Congress President Rahul Gandhi and other party leaders held a candlelight vigil at the India Gate here to demand strict action in Unnao and Kathua rape cases.

With the ongoing Unnao and Kathua rape cases, the Indian social media has been abuzz with the words – “rape horror”.

Earlier on April 8, a woman and her family tried to commit suicide outside Uttar Pradesh Chief Minister Yogi Adityanath’s residence in Lucknow in Uttar Pradesh.

Her family alleged that she was raped by Bharatiya Janata Party (BJP) MLA Kuldeep Singh Sengar and his accomplice last year, and no action was taken against the accused. However, the victim’s father died on April 9 allegedly in police custody.

On the other hand, an eight-year-old girl belonging to a nomadic Muslim tribe in Kathua district of Jammu and Kashmir was allegedly abducted, drugged, gang-raped, tortured and killed in January.

Among the accused in the case are police officers and a retired government official. Woman shoots at auto driver in Gurugram for not giving way, arrested

Welcome to Goa, but don’t urinate on roads: Parrikar