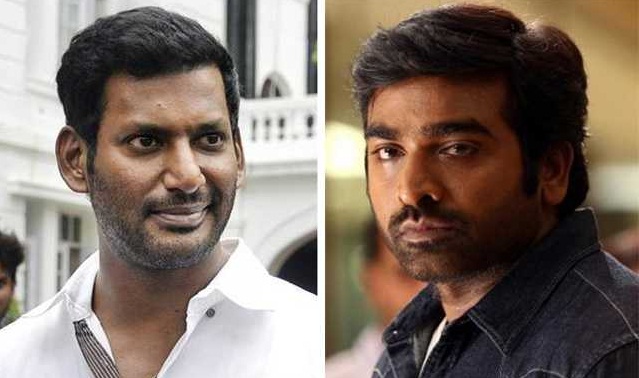 We had earlier reported that actor Vijay Sethupathi accepted to bear the money that producer G Nandagopal of Madras Enterprises owes to actor turned producer Vishal, after his film ’96’ also starring Trisha was stalled for the initial screenings in theatres yesterday. The latest is that Vishal has now come forward relieving Vijay Sethupathi from such heavy financial pressures.

The film marks the directorial debut of Prem Kumar, who did the cinematography fo Naduvula Konjam Pakkatha Kaanom which also starred Vijay Sethupathi. The release of his production ‘96’ was stalled yesterday due to financial issues. Vijay Sethupathi came up assuring that he will bear the responsibility of paying 1.5Cr to clear the issues.

Vishal had arranged for a financial help producer Nandagopal, who could not pay the debt with interest and so the issue came to the Tamil Film Producer Council. As it happens regularly with such issues, it puts a hold on any producer’s movie for release.

Vishal claims that such a pain is unbearable and shouldn’t happen to any actor as he personally is going through financial burdens. He has now promised to pay the interest for that huge amount owed by Nandagopal and will collect the principal amount of debt from him.

Second Look of Rajinikanth From his Upcoming Film "Petta" This Video From Sam And Chay’s Wedding Is Heart-warming