State government found wanting when it comes to appointing counsellors

Tamil Nadu has recorded the most suicides after Maharashtra of students in schools and colleges, according to data provided by Minister of State for Human Resource Development Upendra Kushwaha in response to a question in the Lok Sabha on July 30.

As education was on the concurrent list and a majority of schools were under the control of State governments, they had been advised to frame a special strategy for guidance and counselling in schools. 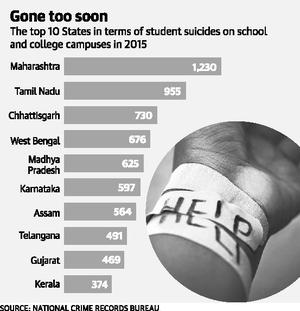 In Tamil Nadu, school teachers’ associations have been appealing to the government to provide two counsellors per education district.

“The state has 112 education districts. If two counsellors are appointed per district, they would be able to visit each school by rotation and ensure student welfare. But the government has been lathargic,” said K.P.O. Suresh, president of the Tamil Nadu Postgraduate Teachers Association.

Counsellors would prevent students from buckling under pressure of exams, Mr. Suresh added. No sweets exchanged with Pakistan on Wagah border: BSF Omar urges India, Pak to work together to bring peace